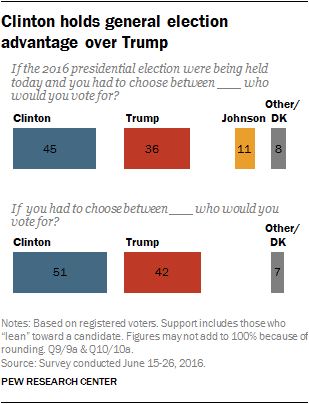 The new national survey by Pew Research Center was conducted June 15-26 among 2,245 adults, including 1,655 registered voters.

Far more voters also say the phrase “would use good judgment in a crisis” better describes Clinton (53%) than Trump (36%).

It’s interesting to note that in 2012, the June Pew Poll showed President Obama up over Mitt Romney 50% to 46%, and Obama went on to win by the same margin – 4 points.

I’ll  be curious to see if this predictive ability holds up this November.