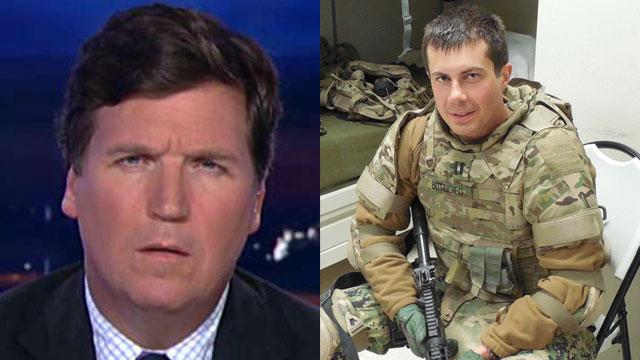 Thursday night Carlson snidely mocked the Transportation Secretary for taking time at home in order to be with his husband, Chasten, and their two newborns, Penelope Rose and Joseph August.

During that time, Buttigieg has been on call  given that there are supply chain issues worsened by the continuing pandemic. But instead, Carlson yukked it up saying Buttigieg was trying to “figure out how to breastfeed.”

“No word on how that went,” added Carlson.

By the way, is this the best moment to mention that Fox News offers paternal leave, and employees have used it over the last year…?

Tucker Carlson mocked Pete Buttigieg for being a gay parent. Any remaining Fox News advertisers should be destroyed for their embrace homophobia. https://t.co/JXQQjwvMEt

Buttigieg clapped back at the homophobic remarks during an appearance on MSNBC’s Deadline: White House.

“Well, look, in his case, I guess he just doesn’t understand the concept of bottle feeding, let alone the concept of paternity leave,” Buttigieg told Nicolle Wallace. “But what is really strange is that, you know, this is from a side of the aisle that used to claim the mantle of being pro-family.”

“Well, look, this attack is coming from a guy who has yet to explain his apparent approval for the assassination of Harvey Milk,” he continued. There was previously controversy when a high school yearbook of Carlson’s indicated he was a part of the “Dan White Society” — White is the man who assassinated Milk. “So obviously, we know that there’s some dark places where some of these attitudes come from,”

“But I also note that that doesn’t speak for the country,” Buttigieg added. “I don’t think that even speaks for most people on the other side of the aisle from the party that I belong to.”

Sec. Pete Buttigieg calls out Tucker Carlson for the attack on his parental leave, "This attack is coming from a guy who has yet to explain his apparent approval for the assassination of Harvey Milk, " pic.twitter.com/DsyQgCyUNO

"I have a great career… but the moment that you hold your child in your arms for the first time… you very quickly realize that no matter what your career may or may not include, the most important job you have is the job of parents" – @SecretaryPete w/ @NicolleDWallace pic.twitter.com/mTrp45sa7L

Joy Behar of The View also took a moment to shred Mr. Bowtie Carlson for his homophobic idiocy.

“I’d like to just say that Pete Buttigieg served six years in the Navy Reserves and was deployed in Afghanistan,” said Behar. “Tucker Carlson was booted off Dancing With the Stars after he couldn’t even do the cha-cha.”