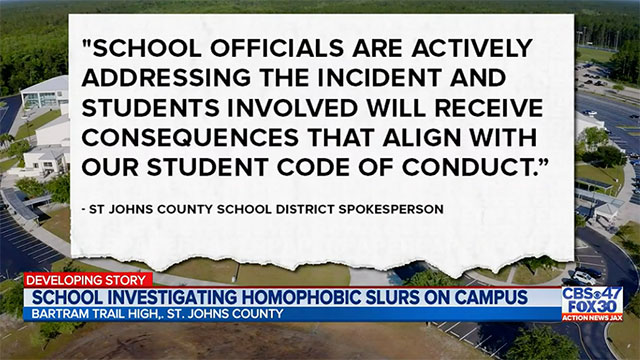 Videos circulating on social media over the weekend appear to show a group of students shouting homophobic hate speech at other students at a high school in St. Johns County, Florida.

A troubling series of videos posted to social media this week appears to show a group of students hurling hate speech at other students at a St. Johns County high school. https://t.co/cQkra2AZVo

A parent of a student there, who asked to remain anonymous to avoid backlash, called the videos chilling and said she also saw students stomping on a rainbow flag, a symbol of LGBTQ pride.

Noah Gonzalez Sebastian Parades
Taylor berger Brendan Moses those are all the names I know please spread the word make the school do something because this is not acceptable behavior kids should not have to deal with being scared about going to school and being themselves- pic.twitter.com/OwYxhDV9E9

One parent, Nancy Tray, told News4Jax she found the videos “shocking and horrifying.”

“It was very emotional,” said Tray. “It made me extremely sad. It makes you question as a parent your life choices if this is the right school for your kid.”

“I think it’s impossible to learn in an environment where, at a very minimum, you don’t feel safe. Our students need to feel safe in order to get the education that they need,” she added. “I think that we need to have no tolerance for this sort of behavior.”

Another mother told the local CBS News affiliate her daughter was one of many targeted in the incident.

She said the group of students waved make-shift Confederate flags as they yelled the homophobic slurs. She added that a Pride flag was ripped out of her daughter’s hand.

“She’s approached by one of the boys, who started yelling at her saying, ‘You’re gay. You have no rights,’ and kind of spitting at her. She walked past it and got on her bus,” the mother said.

No violence was reported. The videos have reportedly been sent to the St. Johns County Sheriff’s Office where a sargeant in the youth resources division is expected to investigate.

A spokesperson for the St. Johns County School District told News4Jax it is looking into the matter.

If you think this is upsetting, wait til you find out what their parents have been saying…

Imagine getting this mad and disruptive over an after school club you aren’t required to join. That anger and ignorance is coming directly from the parents and and passed down.