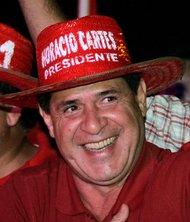 The nation of Paraguay is holding presidential elections on Sunday and its frontrunner, Horacio Cartes, was asked to react to Uruguay’s recent passage of marriage equality.

In a radio interview this month, Mr. Cartes, 57, theatrically threatened to inflict harm on his own private parts if his 28-year-old son were to seek to marry another man.

“I would shoot myself in the testicles, because I do not agree,” he said, using slightly more colorful language to describe how he would react to such a possibility.

Cartes also “set off a fierce controversy…after publicly comparing gay people to ‘monkeys’ and likening the support of same-sex marriage to believing in ‘the end of the world.'”

Cartes’ opponent is also opposed to same-sex marriage, but, the paper reports, has adopted a “more nuanced stance.”