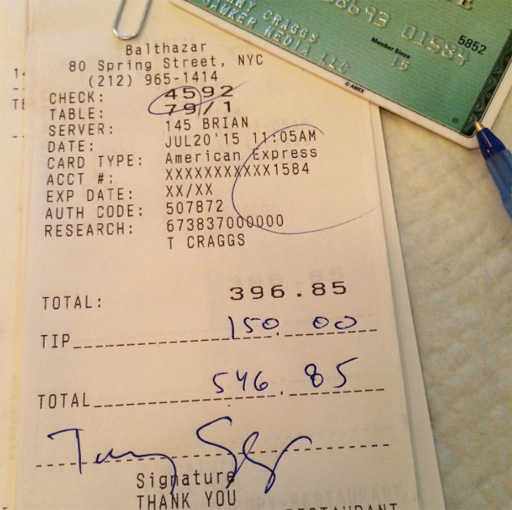 On his way out the door, after resigning as executive editor at Gawker, Tommy Craggs posted a pic to Instagram showing the receipt for a pricey lunch charged to his Gawkers’ expense account.

The photo, which clearly displayed an American Express credit card with Craggs’ name and Gawker Media LLC, showed a charge of $546.85 check at Balthazar, a New York restaurant. The payment included a $150 tip.

Craggs and Gawker editor-in-chief Max Read announced Monday that they were resigning from the company after an article about a failed gay rendezvous by a Condé Nast media executive was removed from the site. The removal last week followed major backlash throughout media circles.

The article ordered removed by the founder of Gawker outed a closeted executive who had been the target of a blackmail attempt.