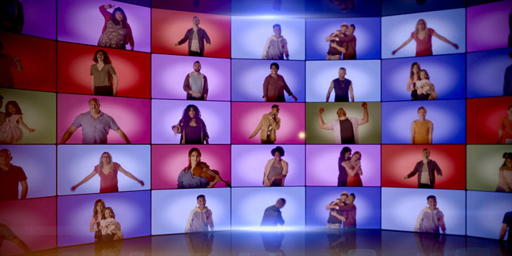 All of the proceeds from the single will benefit the Los Angeles LGBT Center’s Youth Center.

Close friends for more than 30 years, the two artists had been looking to collaborate on a music project and found the message that “love will save the day” particularly resonant in these challenging times.

“Billy and I are both passionate about all LGBT causes, particularly ones that involve our next generations,” said Zarley, who also produced the track as well as directed and edited the video.

“We wanted to help raise awareness for this invaluable organization and the work they do,” It’s incredibly important and is helping save the lives of the youngest and most vulnerable members of our community.”

And speaking of ‘community,’ that’s exactly what’s front and center in the music video for “You Gotta Be.”

Zarley and Porter are joined by dozens of friends grooving, twirling, lip-syncing for their lives in solo and same-sex couplings.

After ruling the red carpet during this past awards season, Porter is currently shooting Season 2 of the acclaimed FX series Poseset to return to the airwaves June 11.

Zarley’s latest project is an album titled The Estrogen Sessions,which pays tribute to some of pop music’s most prolific female artists (Dolly Parton, Celine Dion, Sara Bareilles, Whitney Houston) featuring the songs they made famous. “I Will Always Love You,” “That’s The Way It Is,” “Gravity,” and “I Look To You” are just a few of the tunes featured on the set.

Check out “You Gotta Be”with Billy Porter and Matt Zarley below.