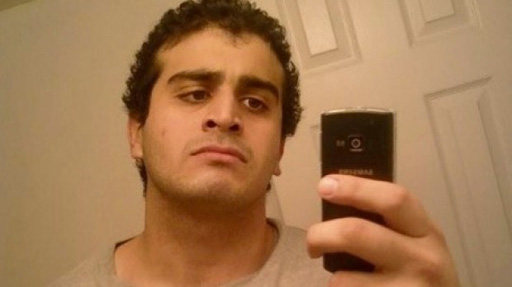 “Sometimes he would go over in the corner and sit and drink by himself, and other times he would get so drunk he was loud and belligerent,” said Ty Smith, who also uses the name Aries.

He saw Mateen at the club at least a dozen times, he told the Orlando Sentinel.

“We didn’t really talk to him a lot, but I remember him saying things about his dad at times,” Smith said. “He told us he had a wife and child.”

It’s not known if Mateen’s visits to the club were for “scoping out” the club for his future attack, OR if he was there to actually meet/socialize.

ABC News is reporting Kevin West, a regular at Pulse Nightclub, said Mateen had contacted him three months ago through the gay dating app, Jack’d.

“When he first contacted me, he was saying things like, ‘What clubs are popping and things of that sort, what are good places to go?’” West said. “And I remember telling him, ‘Oh, you can just look it up online because I don’t go out that much.”

West said he didn’t think anything of it at the time.

On Sunday morning, he said he met with FBI agents and showed them his communications with Mateen.

West says he recognized Mateen across the street from Pulse about an hour before the carnage began.

Cord Cedeno, a frequent patron at Pulse nightclub, told MSNBC’s Chris Hayes tonight that he recognized Mateen from his photos as someone who had messaged him on Grindr.

“I recognize him from one of the apps, but I instantly blocked him because he was like very creepy in his messages and I blocked him immediately,” Cedeno said.

“I know there’s plenty of other guys that he’s tried to contact and hook up from. A lot of them are scared to come out and tell the FBI.”

The Palm Beach Post has spoken to a former classmate of Mateen’s when he was attending the Indian River Community College police academy.

The classmate said that he, Mateen and other classmates would hang out, sometimes going to gay nightclubs, after classes at the Indian River Community College police academy. He said Mateen asked him out romantically.

“We went to a few gay bars with him, and I was not out at the time, so I declined his offer,” the former classmate said. He asked that his name not be used.

He believed Mateen was gay, but not open about it. Mateen was awkward, and for a while the classmate and the rest in the group of friends felt sorry for him.

“He just wanted to fit in and no one liked him,” he said. “He was always socially awkward.”

I’m not sure what to think about these revelations. On one hand, it could be that Mateen was an anti-gay predator looking to lure victims, or perhaps he was a self-loathing gay man who couldn’t deal with his own sexuality and finally snapped.