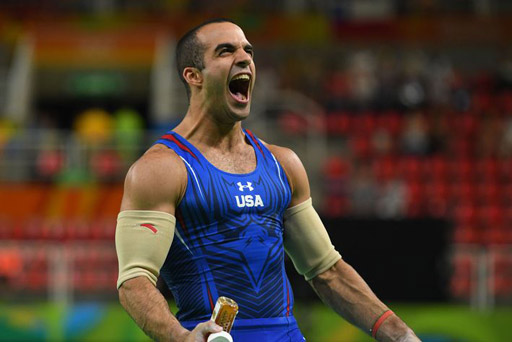 The love within the LGBT community is so much stronger than the hatred against it. And it is our responsibility as non-LGBT people to emulate this love and create a world where LGBT people don’t need to crate their own safe spaces. That is a promise I’m making.”

Leyva goes on to stand up not only for gay and lesbian rights but for transgender rights for the dignity to use the bathroom that aligns with their gender identity.

Big thanks to LGBT activist Aaron Baldwin for the heads up. We knew Danell rocked, but it’s very important and powerful that we see these full throated messages from our LGBT allies.

Oh, and by the way, how about his 2 Olympic silver medals today at the Rio Olympic games??? Winners rise.

Congrats to Danell for showing us greatness inside and out. Watch his message of unity below.

Part 1 of my thoughts of the Orlando shooting… So many thanks to my amazing friend @alicebeggs for helping me get my thoughts into coherent words.
A video posted by Danell J Leyva (@danelljleyva) on Jun 14, 2016 at 7:44pm PDT

Part 2 of my thoughts on the Orlando shooting… My thoughts and prayers are with all the families who suffered such terrible losses… And to all the victims, you will never be forgotten
A video posted by Danell J Leyva (@danelljleyva) on Jun 14, 2016 at 7:48pm PDT

wow….. I honestly can’t be happier… What an experience… What an Olympics.. Thank you to everyone for the unwavering support and love
A photo posted by Danell J Leyva (@danelljleyva) on Aug 16, 2016 at 5:19pm PDT