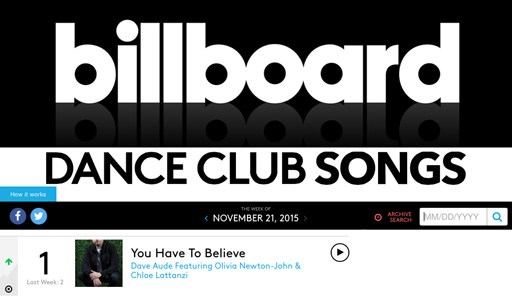 Pop music legend Olivia Newton-John and daughter Chloe Lattanzi have become the first mother/daughter team ever to hit number 1 on the Billboard Dance Charts with their reimagined version of the ON-J hit “Magic,” now titled “You Have To Believe.”

Although she has topped many Billboard charts (Top 200, Top 100, Pop, Country, Soundtrack), this is Olivia’s first number one on a Dance chart. Additionally, this is Lattanzi’s freshman appearance on the Billboard charts ever.

Lattanzi, who makes her Billboard chart debut with “You Have to Believe” echoes her mother’s excitement with the success of the song: “Having had the chance to work with my mom was such a great learning experience,” says Lattanzi. “Now add to that being #1 makes it icing on the cake – I’m so proud of being a part of such an amazing team!”

In addition to her chart-topping status with “You Have to Believe,” Chloe has also been in high-demand since the debut of the song’s music video, which also enjoyed success reaching the #2 spot on the “All Music Videos” chart on iTunes in August. After seeing the video, former Backstreet Boy, Nick Carter, immediately created a role for Lattanzi in his upcoming SyFy Channel zombie film, Dead 7, which is scheduled for broadcast in early 2016. Lattanzi is currently in the studio working on the follow up to her latest #1 hit.

The music video for the song created a sensation when released a few months ago, with Lattanzi skipping through the Las Vegas Neon Graveyard before exploring classic club life in a nightclub with celebrity impersonators, all while Olivia sings from a white, lofty haven.