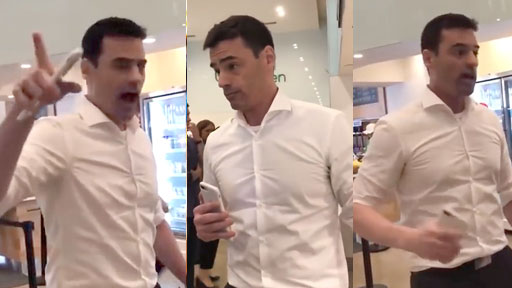 Again – two women having a private conversation at lunch speaking Spanish. Freedom of what?

The white guy decided you can only speak English in his presence. Even if he’s not a part of your conversation.

It didn’t take the Twitterverse long to determine this guy happens to be New York City lawyer, Aaron Schlossberg.

Oh, Aaron Schlossberg, it must be awful to be accosted by a stranger when you’re just trying to work and go about your day. pic.twitter.com/tndpgYB6VC

EXCLUSIVE: Just happened – I confronted Aaron Schlossberg outside court in Queens. He surprisingly had nothing to say about his racist rant. This is the FIRST time we see him after he went viral. @PIX11News pic.twitter.com/e1T6S4kLTU

Heavy.com take a look into the man that is Aaron Schlossberg here.

It won’t surprise you to hear Mr. Schlossberg donated to Donald Trump’s campaign.

Intrepid Twitter folks found this older video from 2016 where Schlossberg called a complete stranger “an ugly fucking foreigner.” It seems Mr. Schlossberg likes yelling at people who are “different” from him.

This is the unedited video from October of 2016 of Manhattan Attorney Aaron Schlossberg assaulting, then calling a complete stranger “an ugly fucking foreigner” on the sidewalk on 5th Avenue.

The man he’s talking to, @morewillie, is a white man from Massachusetts.