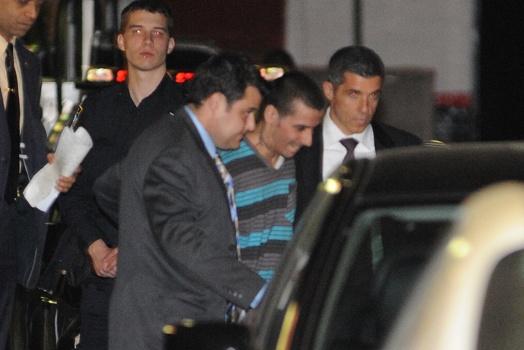 The New York Post reports that the man accused of shooting New Yorker Mark Carson in the face at point blank range laughed and boasted about the shooting shortly after being arrested.

“Yeah, I shot him in the head,” sneered Elliot Morales, 33, while “laughing on the ground” when cops were handcuffing him for shooting Mark Carson, 32, early Saturday morning.

Morales today was held without bail on charges of second-degree murder as a hate crime, menacing and two counts of criminal possession of a weapon, court records show.

“Look at these faggots,” said Morales, who was accompanied by two friends, according to police.

“What are you, gay wrestlers?” he challenged Carson and his pal, who were wearing boots, cut-off shorts and tank tops.

Carson and his friend kept walking to avoid a confrontation, but Morales — whose pals left him before he turned violent — followed the duo and asked Carson, “Do you want to die here?”

Morales allegedly pulled out a silver Taurus .38-caliber revolver and blasted the man in the cheek. Carson died shortly after at Beth Israel Hospital.

Morales has six prior arrests, including attempted murder in 1998 and others for criminal possession of a weapon.

He’s served more than nine years in both city and state prisons.

The NY Post says Morales’ two friends have been questioned and released, and are considered “cooperative” in the ongoing investigation.