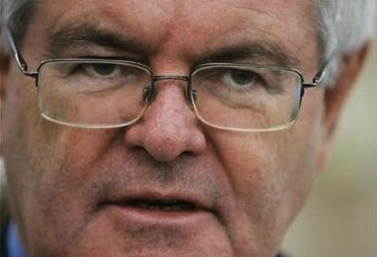 Newt Gingrich, former Speaker of the House and possible GOP Presidential candidate, today criticized President Obama for his decision to order the Department of Justice to stop defending the anti-gay Defense of Marriage Act.

“I believe the House Republicans next week should pass a resolution instructing the president to enforce the law and to obey his own constitutional oath, and they should say if he fails to do so that they will zero out [defund] the office of attorney general and take other steps as necessary until the president agrees to do his job,” said Gingrich.

To be absolutely clear here: the president’s oath – specifically his oath I’m talking about here – has nothing to do with laws passed by Congress.

DOMA is not part of the US Constitution.  Are we clear here?

Gingrich went on to say: “Imagine that Governor Palin had become president. Imagine that she had announced that Roe v. Wade in her view was unconstitutional and therefore the United States government would no longer protect anyone’s right to have an abortion because she personally had decided it should be changed. The news media would have gone crazy.”

I would also point out that Obama is a constitutional law scholar who taught at the University of Chicago Law School for 12 years. Gingrich, a former history professor, taught at West Georgia College. Does it take a legal expert to figure out who might be more educated or qualified to know what is or isn’t constitutional?

And while Mr. Gingrich seems concerned about the anti-gay Defense of Marriage Act not being defended, and therefore what must offend his own value system, let us not forget that this is the man who cheated on his first wife – while she lay in a hospital bed dying of cancer – with his then mistress. His mistress who became his second wife, who he then cheated on with the woman who would become his third wife.  Yes, a veritable pantheon of morality.  This isn’t being snarky kids – these are the facts.

The more you think about it, the name Newt becomes more and more appropriate.