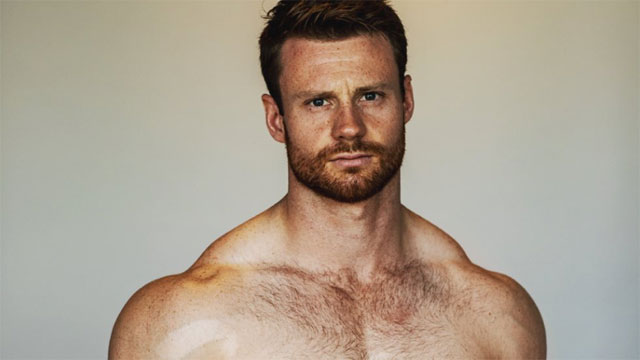 • InstaHunks: Yep, it’s calendar season and if you like gingers (umm, who doesn’t?), the new Mitch Fit calendar is for you!

• Daily Beast: Robert De Niro declares he’s Team Buttigieg saying in a recent interview, “He’s got all the credentials — Rhodes Scholar, Afghanistan veteran — even though he’s young, and if he could get a chance it could be something special, I think.”

• Men’s Health: Henry Cavill talks about what motivates him in the gym. “It’s not like I’m a golden god — I’m just proud of what I achieved. And then you can take your clothes off in front of your significant other, and they’re like, ‘Goddamn, you look great!’ Like, ‘Yes! I’m making other people happy.’” For the record, yes – it would make me happy for Henry to take his clothes off 🙂

Check out the latest Men’s Health this month where I lounge, splash, chill and throw cards….yes, you heard it right, I will be throwing cards. You lucky things you. The most exciting thing about this issue however, is that the masterful trainer Dave Rienzi joins us to help explain some of my training techniques throughout the filming of the Witcher! Thank you, Mr Rienzi, for your time and your knowledge! @DaveRienzi Magazine: @menshealthmag Photographer: @wattsupphoto Author: @brianraftery EIC: @richdorment Fashion Director: @tedstaffordstyle Grooming: @rathorejacqui & @ailbhelemass

• ABC News: Donald Trump, whose sons enjoy killing animals for enjoyment, signed into law today a bill that makes animal cruelty a felony. I totally support the new law, but the irony is inescapable.

• Global Citizen: Italy has passed a law that will give garbage collection tax breaks to businesses that donate unsold to charities rather than throw it away. Currently, the country spends more than $13 billion USD on waste management.

• New Music: Like the track itself, the new music video for “Oh Mama” from indie-pop group Milky Chance has a trippy, retro blues vibe. It’s pretty hard to avoid nodding in time with the song. From the band’s new release Mind The Moon.