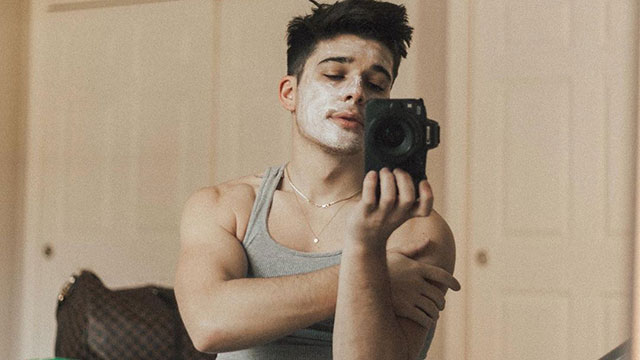 • InstaHunks: Cutie Sean O’Donnell (above) says, “Day 6 of self-isolation. I have done my skincare routine 47 times, eaten everything in sight, can almost levitate and have played maybe 100 hours of video games.” How about you folks? How’re you doing?

• CNBC: Former Vice President Joe Biden is the apparent winner of Washington’s Democratic primary, NBC News reported Monday, chalking up another victory in a string of recent upsets over Sen. Bernie Sanders, I-Vt. With 99% of results in, Biden led with about 38% of the vote, edging out Sanders at 36%. Biden will win at least 42 of the state’s delegates, while Sanders will receive 40 delegates.

• NowThis News: This Italian opera singer serenades a quarantined Florence, Italy from his balcony every night. There are now 24,747 diagnoses of coronavirus in Italy with 1,809 confirmed deaths.

• ABC News: Donald Trump says guidelines to combat the coronavirus outbreak could last until July or August, if not longer.

• Global News: Prime Minister Justin Trudeau announced on Monday that Canada will be closing its borders to foreign travelers in an attempt to limit the spread of the novel coronavirus. Trudeau said the restrictions will go into effect Wednesday but exceptions will be made for aircrews, diplomats, immediate family members, and U.S. citizens.

• OUT: On April 7th, when the finale of Schitt’s Creek airs, it will be joined by an hour-long special. Titled Best Wishes, Warmest Regards: A Schitt’s Creek Farewell, that special includes behind the scenes footage and commentary by Levy and the team on creating special Schitt’s moments.