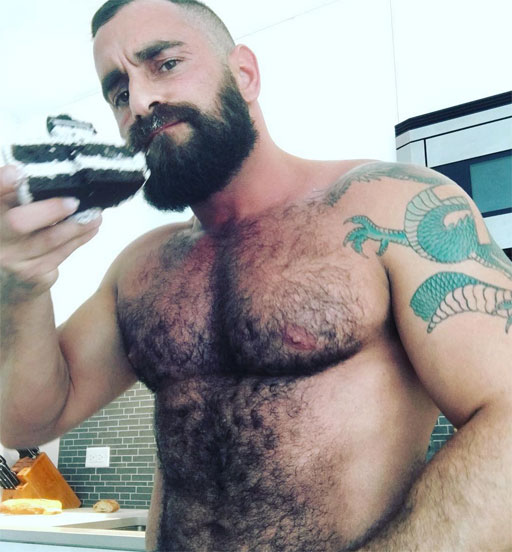 • Instagram’s The Bear-Naked Chef (above) says he don’t need no #ChristianCake from the anti-gay baker in Colorado. Woofy Adrian De Berardinis can make his own dang cake.

• In the aftermath of yesterday’s ruling from the U.S. Supreme Court in favor of Colorado’s anti-gay Masterpiece Bake Shop, South Dakota state Rep. Michael Clark (R) says businesses should be able to turn away black folks if they want to.

• A new poll from Reuters/Ipsos poll shows that 72% of Americans believe that business owners should not be allowed to cite their religious beliefs as a justification for refusing LGBTQ customers.

• A man who used Grindr to drug and rape victims has been sentenced to 23 years in prison.

• During his most recent MSNBC program, conservative host Hugh Hewitt defended the anti-LGBTQ hate group Alliance Defending Freedom in its fight with Amazon. Hewitt failed to mention, however, that ADF is a major sponsor of his radio programs. #ConflictOfInterest

• Comic Michael Henry goes after that silly “thing” where straight guys can’t seem to say if another guy is good-looking because we might think they’re gay.