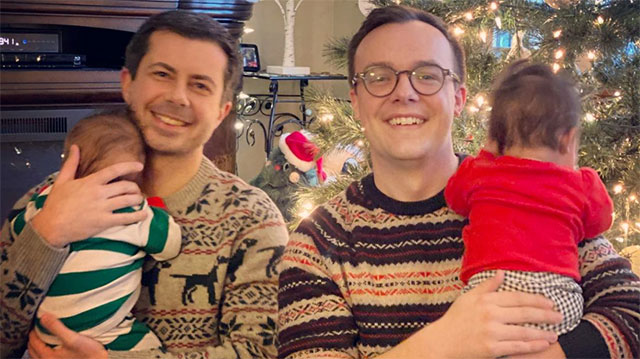 • The Advocate: Chasten Buttigieg called out homophobes who left ugly comments on his holiday photo with hubby Pete Buttigieg and their two children.

• LGBTQ Nation: Students in Tennessee have withdrawn their request to form a Gay-Straight Alliance (GSA) club at their school after conservative parents rabidly attacked them and a supportive faculty member claiming that even the presence of a GSA at the school would “indoctrinate” their kids into being gay.

• Edge Media: Israel’s health minister announced that same-sex couples will be able to have children through surrogate mothers beginning next week, following a 2021 Supreme Court decision.

• AP News: A federal judge in Texas has granted a preliminary injunction stopping the Navy from acting against 35 sailors for refusing on religious grounds to comply with an order to get vaccinated against COVID-19.

A federal judge in Texas has temporarily stopped the Navy from acting against 35 sailors who refused to get vaccinated against COVID-19 on religious grounds. U.S. District Judge Reed O’Connor says the Navy's process for considering exemptions is flawed. https://t.co/77qc6c44rV