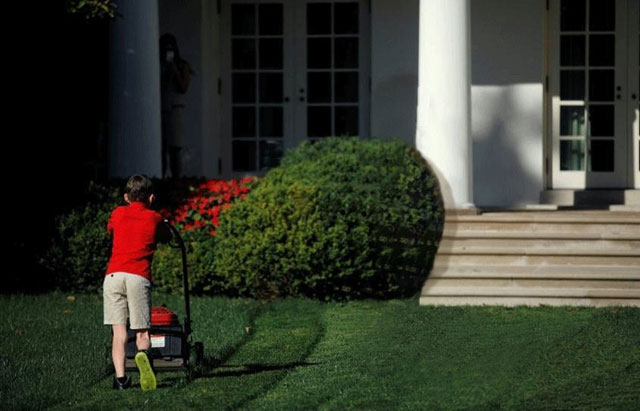 • New Day: I thought a lot about the right image to lead this news round-up today. After years of the popular meme of the lawn boy being yelled at by Donald Trump, today – no yelling. #AndExhale #PoofHesGone

• LGBTQ Nation: Antony J. Blinken, Joe Biden’s nominee for Secretary of State, told the Senate Foreign Relations Committee in his confirmation hearing that he will enact policies that will allow American embassies to support and protect LGBTQ rights around the world by flying the rainbow flag.

• LA Times: The FBI raided the Huntington Beach apartment of openly-gay far-right extremist Kristopher Dreww, who boasted on social media about attending the invasion of the U.S. Capitol. No arrest took place but undisclosed items were removed from the residence.

• Meidas Touch: Bette Midler has a message for Donald Trump. I’m so happy to wave ‘so long dearie’ to the Trump years in the White House, but how could I not post this?

• Washington Post: Donald Trump had imagined a showy military send-off, however only a modest crowd of a few hundred loyalists showed up at Joint Base Andrews to see him off. The event had more of a feel of a county fair than a big-budget extravaganza. In a Trumpian twist, the music that played as he ended his remarks was the Village People’s “YMCA,” a singalong staple from his boisterous political rallies.

• New York Times: The Proud Boys, a far-right extremist group who were staunch supporters of Donald Trump, have begun to turn on the Trumpster calling him “weak” and “a total failure.”

• The Daily Beast: As it became clear that Trump was not, in fact, going to suddenly appear and order the arrest of all the Democrats, QAnon believers – like the Proud Boys – also began to wonder if they had been tricked.

QAnon MAGA struggling today as they realize “The Storm” isn’t coming and it was all BS.

“All my family and co-workers think I’m crazy,” wrote another.

Ron Watkins, son of 8kun owner Jim Watkins & a QAnon influencer himself, told adherents on Telegram “we have a new president sworn in and it is our responsibility as citizens to respect the Constitution…”