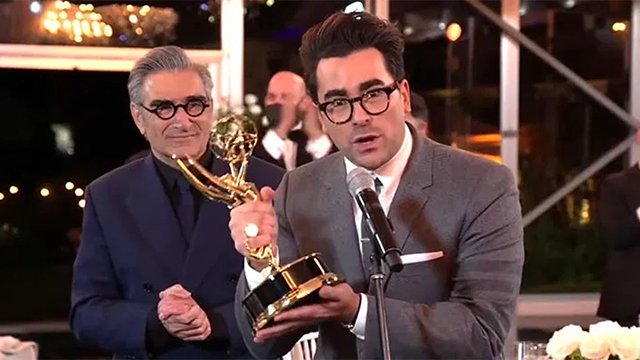 • Instinct Magazine: Emmy Award-winner Dan Levy (above) is working on a number of new projects including a new romantic comedy that he may star in.

• WeHoVille: West Hollywood’s City Council unanimously approved creating a crosswalk painted in the colors of the transgender flag on Monday night and also updating the rainbow crosswalks to add the colors brown and black to symbolize greater inclusivity.

• Out Music: Out Norwegian musician Marie Ulven (aka girl in red) drops this lovely melancholy pop bop, “two queens in a king-sized bed.” Since being discovered on Soundcloud five years ago, Ulven has impressed music fans with her ethereal sound as well as her choosing to lean into her queerness.

• CNN: Donald Trump has begun issuing presidential pardons and among the recipients are former Reps. Chris Collins and Duncan Hunter. Both are Republicans, and both were the first in Congress to endorse Trump for president.

• Philly Inquirer: Looks like we found that ‘voter fraud’ folks have been talking about. A man in Delaware county registered his dead mother and mother-in-law to vote using their IDs, and he then cast a mail-in ballot…..for Donald Trump. The 70-year-old admitted to casting the illegal ballot to “further the campaign of Donald Trump.”

• The Herald: A wedding venue in Winston-Salem, North Carolina, – the Warehouse on Ivy – denied a same-sex couple the opportunity to hold their wedding there citing its ‘Christian values.’ North Carolina is one of 27 states with no statewide laws offering protection from discrimination against the LGBTQ community.

If you are an LGTBQ ally please cancel any events your are planning at Warehouse on Ivy in Winston-Salem, NChttps://t.co/H7RBFEmaQN https://t.co/O1bSyFaqlt