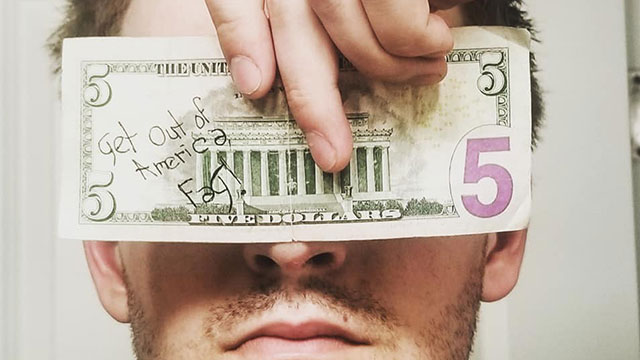 • FOX13Now: A waiter at an Ogden restaurant is sharing his story after finding a bigoted message written on a cash tip that was left for him. Even though the transaction was all-electronic, the customers specifically asked for a pen. The $5 bill (above) was marked with the words, “Get out of America, Fag!”

• Pink News: HIV activists are cheering that China has finally approved the drug Truvada for Pre-exposure prophylaxis (PrEP) which can prevent people from contracting HIV through condomless sex. According to the United Nations, 44 percent of new HIV infections in Asia and the Pacific region last year were in queer men.

• YouTube: I loved this rundown of Top 20 Best Gay Romance Movies (with a happy ending). Lots of my favorite films here.

• Out: A federal judge in Boise has temporarily blocked a controversial law in Idaho that banned trans athletes from participation in school sports. The bill, which Governor Brad Little signed into law this past March, allowed for internal and external verification of a disputed athlete’s reproductive system.

• Washington Blade: A gay former assistant superintendent and contracting liaison for the Catholic Archdiocese of Washington has been charged with fraudulently obtaining more than $2.1 million in funds for personal use from two federal coronavirus relief programs. Kenneth P. Gaughan, 41, reportedly used the funds to purchase a $300,000 yacht, a $1.13 million townhouse in D.C., and a $46,000 luxury sports car.

• Democratic National Convention: I meant to get around to sharing my thoughts on the first night of the convention, but…the day got away from me.

As the second night is about to begin, I have to share this one-two knockout punch from Night One – Michelle Obama’s pitch-perfect keynote speech, followed by Billy Porter and Stephen Stills performing the iconic anti-war protest song, “For What It’s Worth.” #Bam