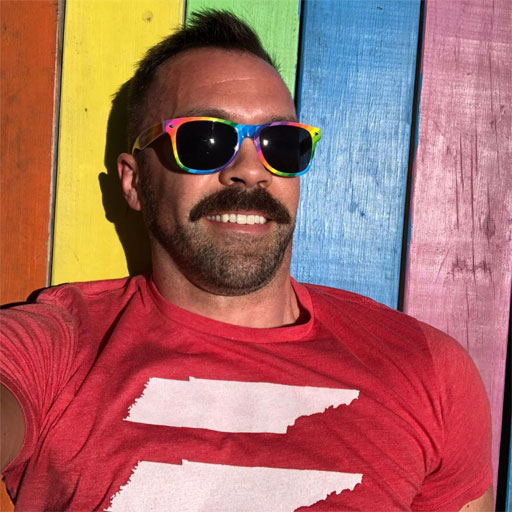 • My totes woofy pal in the South, handsome Joe Woolley (above), is giving you full-on gay rainbow action as he looks to the weekend. Joe and his hubby Jim are big deal LGBTQ activists in Nashville, TN, where we can always use the help.

• Openly gay teacher Michael Hill began receiving threatening letters after coming out last fall. “You need to be fired and you can take your gay ideas with you. Fags are not welcome in our schools.”

• It looks like GLEE alum Kevin McHale finally came out via a tweet about Ariana Grande’s new single, “No Tears Left To Cry.”

#NoTearsLeftToCry is gayer than me and I ACCEPT. Ty @ArianaGrande.

• The Democratic Party has filed a multimillion-dollar lawsuit against the Russian government, the Trump campaign and the WikiLeaks organization alleging a far-reaching conspiracy to disrupt the 2016 campaign and tilt the election to Donald Trump. #TooLate

• Out journalist Thomas Roberts has announced he is donating $25,000 – his fee for hosting the 2013 Miss Universe Pageant in Russia – to the Human Rights Campaign.

• The White House has revealed no Democrats or members of the media will be invited to Donald Trump’s first state dinner hosting French President Emmanuel Macron. #NoSoupForYou!

• Where The Bears Are star Ian Parks reminded me of his admittedly “gratuitous” video from a few years ago. I can watch a few times 🙂