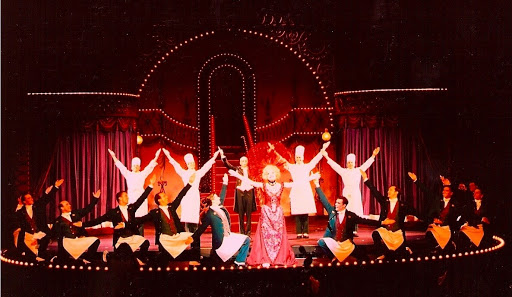 • Jerry Herman’s classic Broadway musical Hello, Dolly! returns to the Great White Way tonight at the Shubert Theatre in a brand new revival starring a reportedly delicious Bette Midler. I made my Broadway debut in the last revival back in 1995 (I’m on the far left above) when Carol Channing made a spectacular return to the role of “Dolly Levi.” Wishing this new cast all the best for a fantastic run!

• On the other end of the spectrum in Texas news, Governor Abbott says he wants to sign a transgender “bathroom bill.”

• Turning this year’s Pride Parade in Los Angeles into an anti-Trump march is making it tough to attract the event’s usual sponsors.

• CNN spoke to to two men who describe being detained, beaten and tortured in Chechnya as part of the country’s violent crackdown on homosexuality. Watch below: