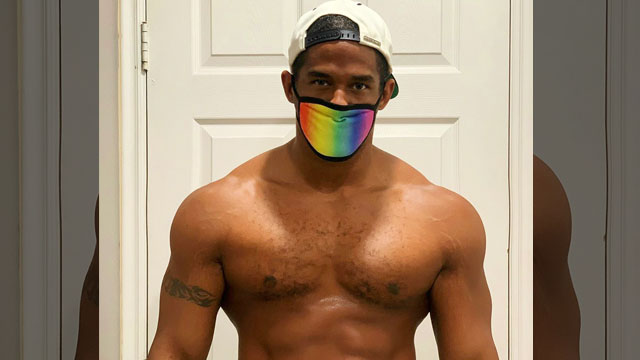 • InstaHunks: WWE superstar Darren Young (above) is styling in his new Pride face mask. “Powered by Pride and not built to be defeated by #Covid19 #quarantinelife“

• Pink News: An anti-gay right-wing American pastor defied social distancing orders amid the coronavirus pandemic to host a live reenactment of Christ’s crucifixion starring his teenage son and daughter as Jesus and Mary.

• KIT212: Kenneth rounds up the what’s what in local gay rags across the U.S. and the world like this week’s issue of Adelante Magazine featuring Carlos Arcos on the cover:

• CNN: Ammon Bundy, the rancher who led an armed occupation of a federal wildlife refuge in Oregon, said he plans on holding a huge Easter gathering despite stay-at-home orders implemented during the coronavirus pandemic. Bundy told CNN he wants to gather hundreds of people in Idaho saying he believes it’s his constitutional right to assemble, even as state and local officials urge people to socially distance to avoid spreading the virus further.

• The Advocate: The marvelous Catherine O’Hara chats about the lessons her beloved  Schitt’s Creek character, Moira Rose, learned after losing her fortune and how the series is more timely than ever. In the series finale earlier this week, Moira officiated her son David’s wedding to his fiancé, Patrick, clad in ecclesiastical pope garb as tears of joy ran down her face sending the moment deliciously over the top.

• Project Q Atlanta: The Dawson County Sheriff’s Office arrested nine men during a three-day sting using Grindr, charging them with a host of misdemeanors and felonies after aggressively pursuing at least one of the men on the hookup app. At least one of the men arrested is openly gay and is accused of offering drugs for sex to an undercover officer on Grindr. But screenshots of their conversation don’t support the allegations included in the man’s arrest warrant.

• Cirque du Soleil: The over-the-top world-wide phenomenon that is Cirque due Soleil is offering a series of spectacular specials for you while we’re all #TogetherAtHome. This week’s one-hour special highlights performances from the Cirque productions of Alegria, KOOZA and KÀ!

If you’ve never seen Cirque, I encourage you to sit back, hit the play button and make sure you watch in full-screen mode. Simply awe-inspiring.