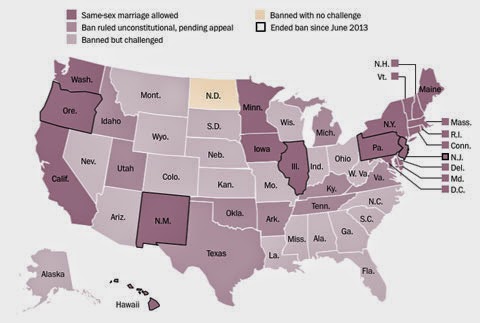 The Washington Post has published an interactive map that shows the current state of marriage equality in the US.

Note the lone North Dakota as the only state with neither same-sex marriage or a challenge to the state’s ban.  That should change soon as Joshua Newville, the lawyer who filed the challenge in South Dakota, has stated a ND suit will be forthcoming in the near future.

Since 1996, when both Gallup and Pew polls reported those who approved of marriage equality was a mere 27%, support has grown to solid majority support at 55% at Gallup and 54% in Pew polls.