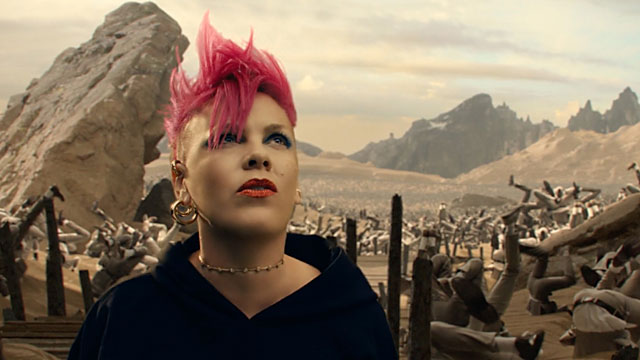 P!nk’s latest music video, “All I Know So Far,” not only features the pop star, but gay icons Cher (as a regal goddess) and Judith Light (as the singer’s mother).

The video opens as P!nk begins a bedtime story for her daughter. Along the way, P!nk shares some of the life lessons she’s learned up to now.

The music video prefaces P!nk’s upcoming documentary P!nk: All I Know So Far, which chronicles her life as a mom and a pop star on the road during her Beautiful Trauma tour.

The doc film will launch globally on Friday, May 21 exclusively on Prime Video in over 240 countries and territories.

Since her debut in 2000, P!nk has released 8 studio albums, 1 greatest hits album, sold over 60 million albums equivalents worldwide, 15 singles in the top 10 on the Billboard Hot 100 chart (four at #1) and has sold out arenas all over the world.

In addition, she is the recipient of three Grammy Awards (twenty nominations), one Daytime Emmy Award, seven MTV Video Music Awards (including the 2017 Vanguard Award recipient), two People’s Choice Awards, and was named Billboard’s Woman of the Year in 2013.