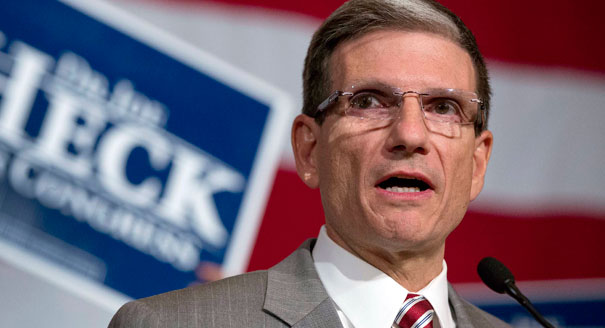 Joey Heck, the 16-year-old son of Nevada Rep. Joe Heck referred to President Obama as a “f—-t” and “n—a”, praising former Republican presidential candidate Mitt Romney for making the Democrat “his slave” during a 2012 presidential debate.

The Nevada teen, who just finished the 10th grade, said “Romney raped Obama” in a presidential debate and lauded the former Republican candidate for making the Democrat “his slave,” according to BuzzFeed.

“Crack that whip Romney,” Heck wrote last year in another message. Yet another post skewered Obama, indicating all he could do was “spear chucking and rock skipping. The sports they do in his home country.”

“There are gays everywhere. Maybe that’s gods way of thinning out the population because f—-ts can’t have babies,” he posted in a retweeted message.

Congressman Heck released a statement saying “that type of language has
never been permitted in our home,” of the messages posted on Twitter by
the youngest of his three children.

“My son also
apologizes for his insensitive behavior. My wife and I have addressed
this family matter directly with him and he has learned from it,” the
boy’s father, 51, added.

The Arizona Republican similarly said that he was disappointed in his son and offered assurances that his son had apologized.