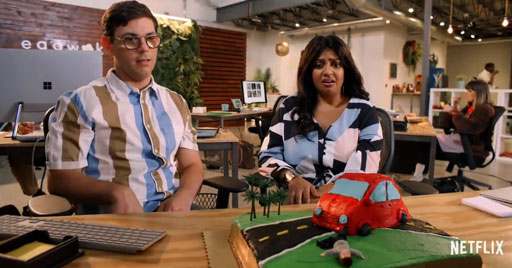 Netflix drops the official trailer for Special, an offbeat comedy series about a gay man with mild cerebral palsy.

Loosely based on the critically-acclaimed memoir by writer/actor Ryan O’Connell – I’m Special: And Other Lies We Tell Ourselves – the series stars O’Connell as a man who “decides to rewrite his identity as an accident victim and finally go after the life he wants.”

After years of dead-end internships, writing in his pajamas as a blogger, and communicating mainly via text messages, Ryan is hit by a car in the street. When his new co-workers assume his limp is due to the accident, he just never bothers to correct the misunderstanding.

“If you could get rid of the thing you hate most about yourself, the thing no one understands, wouldn’t you do it?”

The hilarious and heartwarming 8-episode series is being produced for Netflix by O’Connell along with Jim Parson’s That’s Wonderful Productions and Warner Bros’ Digital Networks’ Stage 13.

O’Connell’s past writing includes being a contributor for Buzzfeed, Vice, Thought Catalog and other publications as well as serving as Executive Story Editor for the reboot of the hit NBC series, Will & Grace.

Special makes its Netflix premiere on April 12. Check out the trailer below.