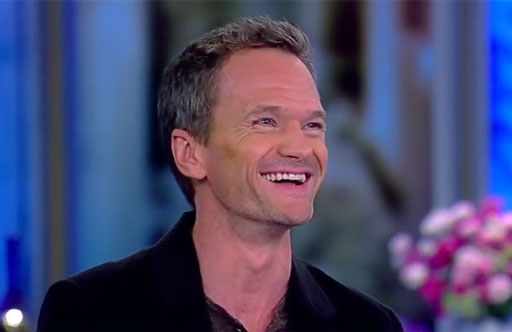 Guess which celebrity promised Neil Patrick Harris they would have sex with him?

Neil Patrick Harris stopped by The View earlier this week to chat on his kids’ upcoming birthdays, National Coming Out Day, and more.

The segment began with Harris sharing pics of his kids and hubby David celebrating Halloween for years with a family-theme when it comes to costume play.

The chat turned to his twins, Harper and Gideon, becoming more and more individual in what they want when it comes to their upcoming 8th birthdays like separate parties.

Smiling at the end of the table, host Whoopi Goldberg said, “I remember you at that age.”

At this point, Harris reminded folks that he made his feature film debut at the age of 15 with Goldberg in a film titled, Clara’s Heart.

According to Harris, Goldberg promised him during the shooting of the movie that she would have sex with him when he reached 25-years-old.

“I might’ve!” said Goldberg with a laugh.

“See, in those days, you could actually have some fun like that,” said Goldberg in reference to the Time’s Up movement. “You can’t do that now.”

Taking the edge off of what could have been an awkward moment, Harris quipped,”Hey, I was not offended – I’m looking forward to it.”

The moment comes at the 2:40 mark below.

When the subject moved to National Coming Out Day, Harris emphasized, “It’s such an individual thing.”

“I guess I applaud the fact that there’s a day people can use as a conversation starter, if they’re not sure how to broach the conversation,” the 45-year-old actor continued. “But, I wouldn’t want to put any undue pressure on someone for needing to choose a specific day to come out.”

A jack of all trades, Harris also proudly shared that the second installment in his Magic Misfits children’s book series is currently number one on the New York Times Best-Sellers List.