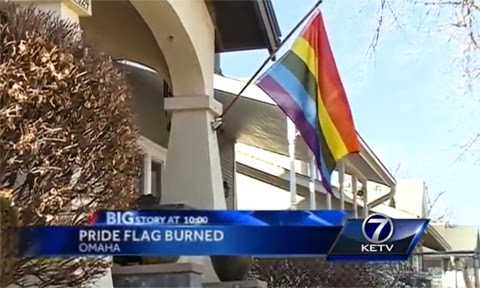 Twenty-three year old Cameron Mayfield of Omaha, Nebraska has been arrested for stealing a neighbors rainbow flag and burning it in the street.

Ariann Anderson and Jess Meadows-Anderson, a married couple who live next door, said it went ‘beyond vandalism or a threat’ as it was a ‘direct attack’.

‘It’s just a reminder that hate is still out there,’ they said.

The two women woke up just after midnight on Sunday morning (1 March), believing their home was being burglarized.

When Meadows-Anderson rushed downstairs to check on their two girls, her wife saw a van drive off.

When they woke up again, they went to a window to see a man running down the street with what looked like a burning stick.

They then both realized he was burning their rainbow flag.

‘You almost feel bad for a minute,’ Meadows-Anderson told WOWT. ‘He’s a young man and he made a hate-filled, drunken mistake that will have a lasting effect on his life and his family.’

Later that day, a new, bigger, brighter Pride flag was flying on their front porch.

Mayfield is facing a 2nd degree felony arson charge and a separate charge for resisting arrest. 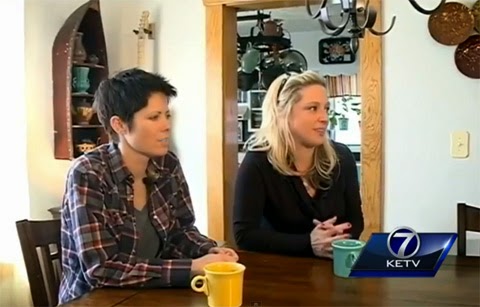