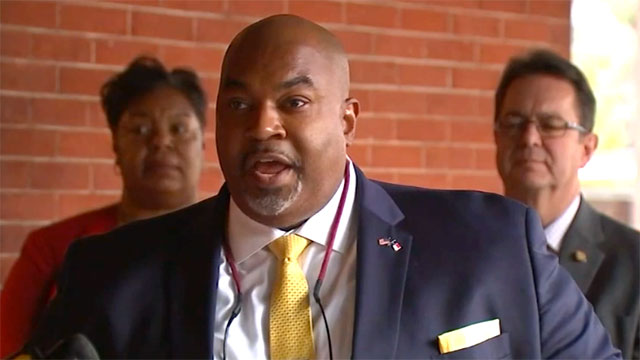 The Republican’s remark were actually made in June at Asbury Baptist Church in Seagrove. But a clip of the speech went viral on Tuesday when it was shared by Right Wing Watch.

“There is no reason anybody, anywhere in America should be telling any child about transgenderism, homosexuality or any of that filth,” said Robinson said to the congregation. “And yes, I called it filth. And if you don’t like it that I called it filth, come see me about it.”

In August Robinson told constituents that any public officer holder who gets vaccinated against the coronavirus “needs to be voted out of office.”

North Carolina Lt. Gov. Mark Robinson says Christians must take control of public schools because children are being abused by being taught "filth": "There's no reason anybody anywhere in America should be telling any child about transgenderism, homosexuality, any of that filth." pic.twitter.com/aXjCPFKTs0

He urged parents to stand up to school boards and school administrators who are “pushing these perverted agendas, to try to teach our children that they’re really not boys or girls, or they’re shoving this homosexuality garbage down their throats.”

Filth. Garbage. I think I see who has an agenda here.

Many in North Carolina called Robinson out for his hateful rhetoric calling for his resignation.

Calling many of your own constituents "filth" means you have no intention of representing them.

Our Lt. Governor should resign and allow someone who is prepared to do the job to take his place.

This wasn't a dog whistle, folks. This was old school hate.https://t.co/uFDA9VzJA8

It's hard to find words to respond to this hatred. No one who thinks like this should be in a position of power in our state.

To all LGBTQ folks here in NC, especially young people, know that you are valid and worthy–no matter what bigots will say. https://t.co/e3PSGgSFzN

We're calling on North Carolina Lt. Gov. Mark Robinson to resign in reaction to recently released video that shows him referring to LGBTQ+ people and the movement for equality — including an LGBTQ+-inclusive curriculum — as “filth.” Read our statement: https://t.co/CTk5thVmwV