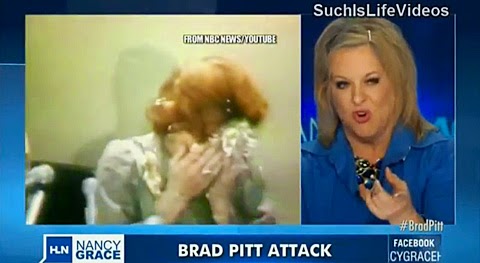 After the recent strange kerfuffle with Brad Pitt on a red carpet, Nancy Grace took time on her Headline News Network show to discuss “stalkers” who attack stars.

In the middle of the discussion, Nancy takes a very strange left turn to anti-gay activist Anita Bryant, who famously advocated against gays and lesbians in the 1970s. Nancy brings up the famous press conference where a man threw a pie in Bryant’s face.

In bringing this up, Nancy says “She makes me think of my own mother. Why would you do this to a ‘sweet lady'” who was “speaking on some issue dear to her heart?”

That “issue” she was speaking to was denying rights to and vilifying gays and lesbians. At the time, Bryant compared gays to prostitutes and folks who have sex with animals.  Bryant’s legacy became being DEFINED at the anti-gay voice of the decade in the 1970s.

Nancy tries to play this off as if it was some pathological syndrome when the truth was the man was upset that she was campaigning against his existence at the time.

What an odd clip to use in discussion “stalkers.” Watch the exchange below: