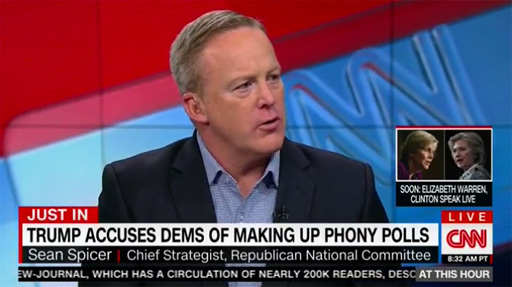 Over the weekend, Donald Trump’s campaign manager Kellyanne Conway admitted that her candidate is currently behind in the race for the White House.

On the campaign trail today, Donald Trump told supporters that he’s winning and that the polls that he’s championed for a year now are faked.

Today, RNC spokesman Sean Spicer told CNN that the contest is in a dead heat, and that the media is pushing polling results showing Trump behind so that Republican voters will stay home.

You have to wonder – which is it? Behind? Winning? Tied?

Or is Spicer doing his job trying to keep GOP morale up so down ballot candidates don’t lose in their races?

During a heated and contentious interview with CNN’s John Berman and Kate Bolduan, RNC communications director Sean Spicer insisted that the race for the White House was a “dead heat” and said that Republican nominee Donald Trump was ahead in several key battleground states.

Per Spicer, the whole thing is even and many polls show Trump is trending up. The spokesperson pointed out a recent national poll from IBD that shows a tied race to justify his belief that it is a dead heat. At that point, Berman interrupted him, saying that they are now getting three narratives — Trump is winning, Trump is behind and now Trump is tied.

Bolduan jumped in to push Spicer to take a side since they had just showed Trump saying that he is winning right now. The Republican strategist then said that Trump was right because he’s winning the state he is currently in, which is Florida.

“He’s winning in Florida,” Berman asked. “Absolutely,” Spicer responded. When Berman questioned by how much, Spicer answered that it was by a “few points.”