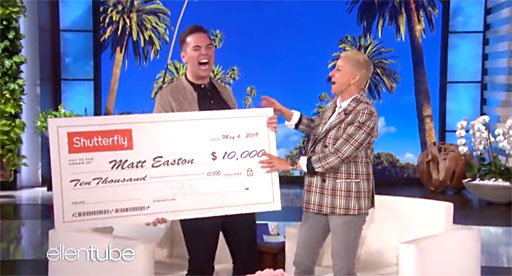 Matthew Easton, who recently came out during his commencement speech as valedictorian at Brigham Young University, sat down with Ellen DeGeneres today to talk about what inspired him to make his announcement.

“It’s something I’ve been wrestling with my whole life,” said the newly-minted graduate. “Ultimately, I decided there’s no better place to do it than here.”

“I thought, I’m ready, this is a new chapter of my life,” he continued. “I’m graduating, and I want to live more authentically, more honestly.”

“More than that, I want to give visibility to the other students who are gay who maybe aren’t so ready to come out,” he added. 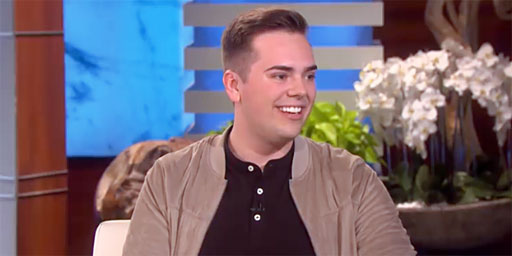 Easton also shared the meaning of the white sash he wore during his speech. Called a ‘stole of honor,’ the sash allowed him to honor someone in particular. Easton chose a former classmate named Harry Fisher, who committed suicide his senior year after coming out.

“It was his last semester, and he was in sort of the same situation that I was, and he decided to come out on Facebook, and because of the rhetoric and the response that he got from our community, he actually ended up committing suicide,” he shared.

“He sat right in front of me,” he added, growing emotional. “And I thought, ‘Is that my future? Is that what I’m headed toward?’ So I thought, maybe if I came out at graduation, maybe a student like me, a freshman, could say, ‘No, my future’s something brighter, something better.’”

“We can succeed, we can do what we want, and accomplish our dreams,” he concluded. “So, that’s why I chose to come out there.”

“It’s all about visibility,” Ellen quietly replied. “A lot of times some people want to keep us quiet.”

Speaking of keeping quiet, Easton shared his plan to come out with his dad the night before the graduation ceremony. He asked his father if it might upset people. His dad had the right answer.

“Matt, if people have a problem with what you’re going to say, it’s a problem with them, not with you,” Easton recounted. “We love you, we’re here for you, and that’s all that matters.”

With his studies in political science now complete, Easton says he’d like to make it out to Washington D.C. someday.

But for now, he has an internship lined up in Salt Lake City. And having come out, he says he’d really like to get involved with the LGBTQ community there.

“For a long time, I’ve been really afraid and scared to participate, and now’s my time to shine,” he announced. “I’m ready to live authentically and I want to get involved.”

Good for Easton. Many closeted Mormon gays take much longer to get to accepting their authentic self.

It looks like he’ll be able to take some time to do just that as Ellen’s connections at Shutterfly wrote a big, fat check for $10,000 for Easton to start his next chapter.