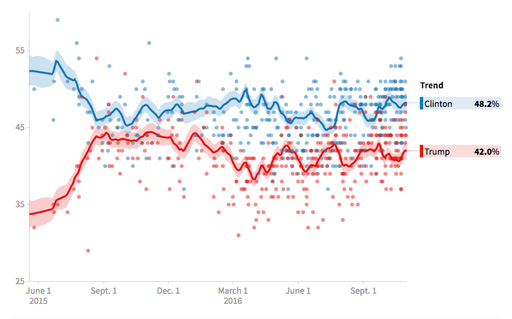 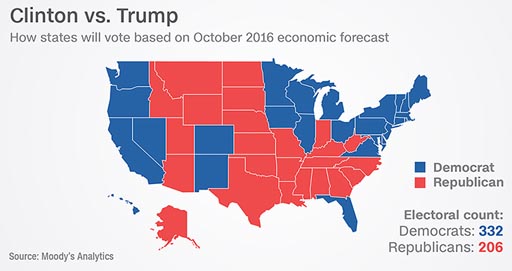 Moody’s Analytics, which has correctly predicted the outcome of every presidential race since 1980, says Democrat Hillary Clinton will come out on top come election day.

Clinton is expected to get 332 electoral votes, while Trump is predicted to get just 206, according to the Moody’s Analytics model, which is based on three economic and three political factors.

Overall, the U.S. is growing and that favors Clinton. Most Americans can feel their pocketbooks getting better. Moody’s predicts key swing states — Florida, Ohio, Colorado and Pennsylvania — all going blue this year.

“Even those who don’t have a car typically pass a gas station and see prices dropping or falling of a daily basis,” writes Dan White, a senior economist at Moody’s, who worked on the model for the 2016 election.

Gas prices are down, while American incomes and home prices have been rising. At the end of the day, that means a lot of people are better off than they were a few years ago.

The other deciding factor this year is President Obama. Many see Clinton as an extension of President Obama’s policies. Right now, that’s a good thing. His approval rating has surged this year to 55%.

“Historically, no incumbent president since Ronald Reagan in 1988 has had a surge anywhere close to [Obama’s] magnitude in their eighth year in office,” notes White.

The economy and Obama’s rising popularity are likely to make the difference to those coveted few undecided voters, according to the Moody’s model.

For comparison, here’s how other prognosticators see the race for the White House:

And the New York Times Upshot thinks Clinton has an 88% chance of winning the White House: