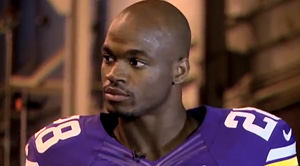 “To each his own,” Peterson said. “I’m not with it, but I have relatives that, you know, are gay. I’m not biased towards them. I still treat them the same. I love them. But again, I’m not with that. That’s not something that I believe in. But to each his own.”

“I’m sure the Vikings’ organization did not release him based on that,” he continued, weighing in on whether or not he thinks Kluwe was cut for his views on gay marriage. “They know Kluwe. They’ve been knowing him for a long time. They know he’s outspoken.”

Really makes you miss Chris Kluwe on the Vikings team, doesn’t it?

(Looking to the horizon to Oakland, CA, where Kluwe now is a Raider…)