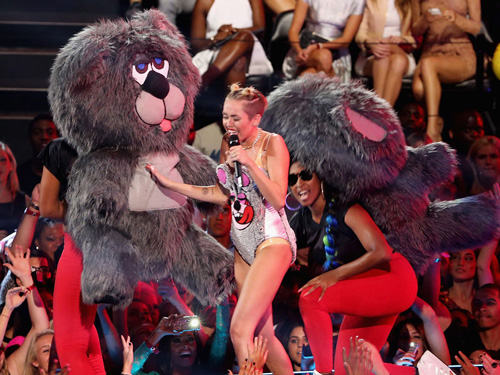 So, on the day after, this is the performance everyone is talking about. And not in a good way.

Bless Robin Thicke for his courage to take part in this. He does look pretty studly in his suit and sunglasses.

But Miley, Miley, Miley – this is the kind of thing when you go for “edgy” but fall off the cliff. From The Hollywood Reporter:

Miley Cyrus climbed out of a giant teddy bear, sticking her tongue out of the side of her mouth.

She then strutted around the stage, accompanied by dancers wearing giant teddy bears, performing her controversial single “We Can’t Stop.”

Sporting a furry bustier designed to look like a mouse, the 20-year-old singer at one point grabbed the rear end of one of her dancers before bending over to shake her own behind at the audience.

MTV also bleeped the word “molly” in her song, which is believed to be a reference to Ecstasy.

Cyrus then stripped down to a flesh-colored two-piece to join Robin Thicke for the beginning of his performance of “Blurred Lines,” alternating lines with the R&B crooner.

She also danced around him suggestively, touching him and herself with a foam finger, and bending over in front of him and shaking her rear end.

Thicke wore a Beetlejuice-esque black-and-white vertical striped suit during his performance while his dancers held up posters of champagne and a fancy watch.

After “Blurred Lines,” Thicke then segued into his new single “Give It 2 U” while Cyrus remained on stage dancing suggestively with her foam finger.