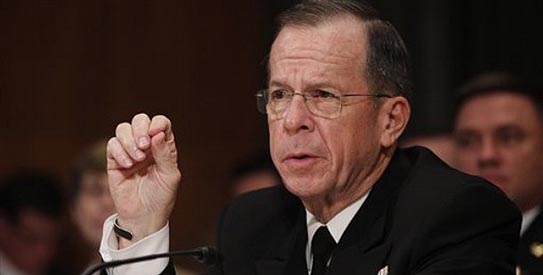 From LGBTQnation: Last Friday, at a large gathering of U. S. political and military leaders, invited guests, and service members, President Barack Obama acknowledged the services rendered to the nation and its citizens by the outgoing Chairman of the Joint Chiefs of Staff, Admiral Michael Mullen, whose retirement ceremony marked the end of a distinguished forty-three year career in the U.S. Navy.

Among his remarks, President Obama said: “And today, thanks to Mike’s principled leadership, our military draws its strength from more members of our American family. Soon, women will report for duty on our submarines. And patriotic service members who are gay and lesbian no longer have to lie about who they are to serve the country that they love. History will record that the tipping point toward this progress came when the 17th Chairman of the Joint Chiefs of Staff went before Congress, and told the nation that it was the right thing to do. Mike, your legacy will endure in a military that is stronger, but also in a nation that is more just.”

The Admiral’s unwavering support for the repeal of “Don’t Ask, Don’t Tell,” along with his boss, Defense Secretary Robert Gates, earned him the gratitude of gay and lesbian service members, as well as gay and lesbian civilians who wished to enter the armed services but had been prevented from doing so by the policy.

Under intense questioning from members of the Senate Armed Services Committee on Feb. 2, 2010, Mullen, who indicated that he had known of gay and lesbian service members since his entry into the Navy in 1968, told Senators:

“Mr. Chairman, speaking for myself and myself only, it is my personal belief that allowing gays and lesbians to serve openly would be the right thing to do. No matter how I look at this issue, I cannot escape being troubled by the fact that we have in place a policy which forces young men and women to lie about who they are in order to defend their fellow citizens. For me personally, it comes down to integrity — theirs as individuals and ours as an institution.”