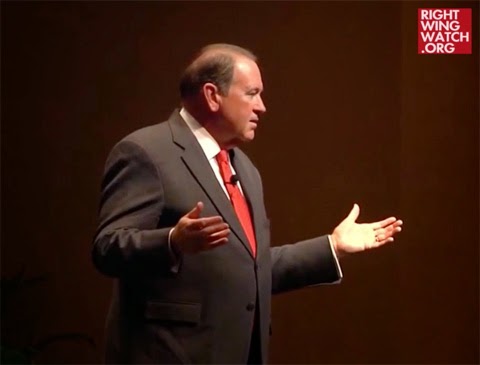 Former Arkansas Gov. Mike Huckabee, speaking at the Family Leadership Regional Summit last week in Iowa, said that President Obama calling NFL hopeful Michael Sam last year when he came out a sign that the culture of America is in ‘utter collapse.’

‘The values that so many of us hold dear are values that are under assault today,” he said in a speech. ‘I never believed that in such a short period of time, the culture in America would go into utter collapse.

‘If you told me just a few years ago that one day the President of the United States would use his precious time in the Oval Office to call people up simply to congratulate them for being gay, I would say, “No, surely he’ll call a veteran and thank them for their service, for losing a limb or a leg.” But even when (US Navy SEAL sniper) Chris Kyle was murdered, his widow didn’t get a phone call, but a gay football player who came out did.’

I’m not sure how Huckabee can claim to know everyone that President Obama does or does not call.

In addition to congratulating Michael Sam, Obama publicly congratulated NBA player Jason Collins when he came out and recently singled out gay soccer pro Robbie Rogers when he visited The White House with his team Los Angeles Galaxy.

Huckabee, a failed candidate for the Republican nomination for president in 2008, is weighing a second run for the GOP nod in 2016.