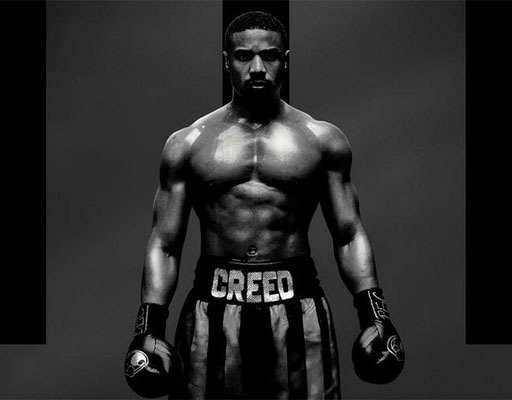 Hot on the heels of winning ‘Best Villain’ at the MTV Movie Awards this weekend for his turn in the mega-hit super-hero movie, Black Panther, Michael B. Jordan is giving you ‘bah-dee’ on the newly released poster for the upcoming Creed II.

We have to wait until Thanksgiving for the 31-year-old to once again put his stacked AF body on display in boxing trunks when returns to his critically acclaimed role as boxer “Adonis Creed.”

The official artwork, trailer and synopsis were just released for the sequel which hits theaters November 21.

In the new film, Adonis seems determined to avenge the death of his father, Apollo Creed, by taking on the son of Ivan Drago (played by Dolph Lundgren) who killed Adonis’ father in a charity fight years ago.

Life has become a balancing act for Adonis Creed. Between personal obligations and training for his next big fight, he is up against the challenge of his life. Facing an opponent with ties to his family’s past only intensifies his impending battle in the ring. Rocky Balboa is there by his side through it all and, together, Rocky and Adonis will confront their shared legacy, question what’s worth fighting for, and discover that nothing’s more important than family. Creed II is about going back to basics to rediscover what made you a champion in the first place, and remembering that, no matter where you go, you can’t escape your history.

Returning for the highly-anticipated sequel are Tessa Thompson as Adonis’ girlfriend, Bianco and Sylvester Stallone, who was nominated for an Academy Award and took home a Golden Globe Award for his return as “Rocky Balboa.”

Watch the trailer below as well as snaps from Big Nasty’s big and brawny Instagram: