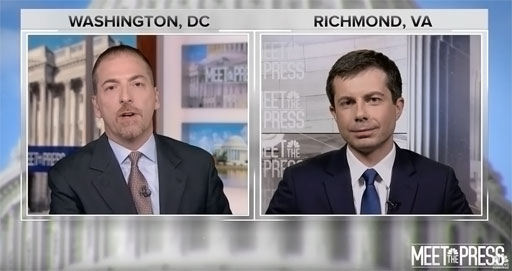 During an appearance on NBC’s Meet The Press, host Chuck Todd repeatedly quizzed Democratic presidential candidate Mayor Pete Buttigieg of South Bend, Indiana, on his relationship with African-American voters and whether being openly gay could be an obstacle in winning their votes.

Reading from an interview with Reverend Rodric Reid of the Uplift Church in Indianapolis, Todd recounted Reid’s thoughts on Buttigieg’s marriage to his husband, Chasten.

“‘I guarantee it’s going to be an obstacle for the candidate from South Bend,” read the quote from Reid. “That is really still a touchy subject, specifically and especially in the African American church.”

Todd then turned to the Mayor and asked how his outreach efforts to the Black community are going.

“They’re going well,” said the 37-year-old mayor. “And we are working very hard to engage people across the party, but especially black voters, who expect you to demonstrate, especially when you’re new on the scene, what your values are and how you’re going to promote policies that lift them up.”

Buttigieg then pivoted to Donald Trump adding, “I also think we have a moment on our hands when we can do the exact opposite of what the president has done.”

“The president has used identity as a wedge, used race as a wedge to divide people who have common interests,” the young mayor explained.

Instead of dividing people, Buttigieg suggested recognizing our “distinctive identities,” whether the Black or LGBTQ community, could help to “build bridges, to reach out to people different from us, knowing that anybody who has been on the short end of an equation of exclusion has a way to sympathize with people who’ve had different experiences with exclusion in this country.”

“And if we build a solidarity around that, then people who have, for whatever reason, felt a lack of belonging or felt exclusion or felt discrimination in this country, even though those patterns of discrimination are very, very different, when all of us come together, we win, and we are all better off,” he added.

Todd wasn’t done with the subject, though.

The NBC host told Buttigieg he’d spoken to African-American congressmen who like what they’ve heard from the mayor and could see themselves supporting his campaign, but are concerned some of their more socially conservative constituents may have issues with his sexuality.

Todd wondered what could Buttigieg do to win over those voters?

Noting that he won his second term as mayor in a 80 percent landslide as an out candidate, Mayor Pete answered, “I’d invite them to look at what happened in South Bend.”

He continued saying he was confident “that American voters, especially Democratic voters, will not discriminate when the opportunity comes up to choose the right leader for the future.”

It is worth noting that a recent Post and Courier/Change Research Poll of likely Democratic primary voters in South Carolina, which holds the third presidential primary in the country and is the first real gauge of African-American voters mood, shows Buttigieg has recently surged into third place with 11% behind former Vice President Joe Biden (37%) and Massachusetts Sen. Elizabeth Warren (17%).

So it would appear that Mayor Pete’s outreach to the Black community is showing positive results.

You can watch Mayor Pete Buttigieg’s full interview on NBC’s Meet the Press below. The discussion on Buttigieg and the Black vote happens at the 12:57 mark.