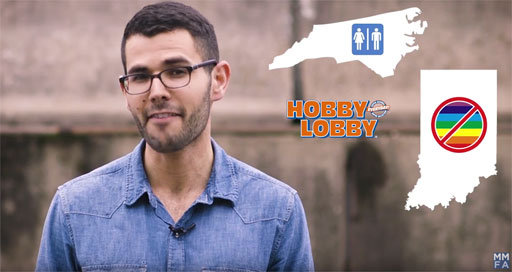 Sounds really patriotic and all that jazz, right?

Not so much. These folks are NOT fighting for LGBT freedoms.

The right-wing organization routinely opposes transgender rights, LGBT rights and women’s reproductive rights. In fact, they have advocated for prison sentences for gays around the world.

ADF is a right-wing legal powerhouse that’s been linked to nearly every recent attack on LGBT equality and women’s reproductive health care. The group has testified against Planned Parenthood and was a major player in the Supreme Court’s Hobby Lobby case. Legislation like North Carolina’s bathroom law and Indiana’s “religious freedom” law are the products of ADF’s behind-the-scenes legal work. The group shops extreme model legislation to state lawmakers across the country, testifies in favor of those laws, and then defends them in local and national media.

But news networks that host ADF often identify them as a “Christian” or “conservative” legal organization, failing to mention the group’s history of smearing the LGBT community and working to criminalize homosexuality. ADF has helped defend laws in Belize and Jamaica that would put people in prison for engaging in gay sex. The group opposes anti-bullying efforts, which it believes will indoctrinate “impressionable” children into homosexuality. Alan Sears, the group’s current president, co-wrote a book which claims that homosexuality and pedophilia are “intrinsically linked.” At a recent conference, one ADF attorney claimed that the brutal murder of Matthew Shepard had been falsely depicted as an anti-gay hate crime in order to advance the “homosexual legal agenda.”