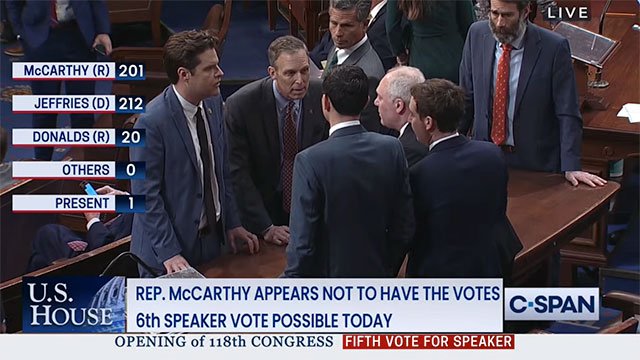 Even though Donald Trump called on Republicans to support GOP House leader Kevin McCarthy for Speaker of the House, the party’s hard-right ‘Never-Kevins’ have now lined up behind Byron Donalds of Florida.

After two House votes today, McCarthy lost both. And in a new development, he lost an additional GOP vote as Victoria Spartz of Indiana voted Present in both rounds.

According to the New York Times, Donalds says “a single member threshold for the motion to vacate — the procedural tool that triggers a vote to oust the speaker — remains a key priority for him.”

As in all earlier votes, all 212 Democrats remain united behind Hakeem Jeffries of New York.

Meanwhile, ALL OUR 212 Members are UNIFIED behind Hakeem Jeffries

“The president needs to tell Kevin McCarthy that, ‘Sir, you do not have the votes, and it’s time to withdraw.’” pic.twitter.com/EWzojWoFYh

Kevin McCarthy has now lost 5 rounds of votes to be US House Speaker…yikes! pic.twitter.com/M8ZMbN85mu