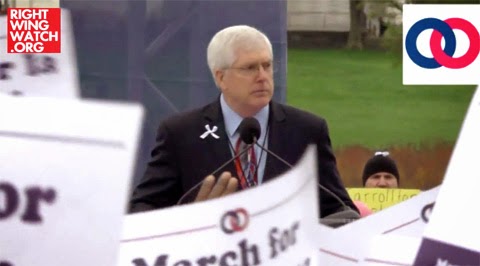 The National Organization for Marriage’s hate march was held today in Washington, D.C., and as expected it was a sad, embarrassing failure for the virulently anti-gay group.

I’m not inclined to go into much detail about the event as it’s pretty much what you would imagine: just a few dozen haters cheering each other on pretending the rights of LGBTs to marry somehow infringes on their lives. Which, of course, they does not.

But I will share just this one clip from the hate speech that went on.

Liberty Counsel founder Mat Staver stood before the crowd to say he would have “no choice” but to disobey such a “lawless” decision.

The “boys need fathers” and “girls need mothers” line is supposed to argue that marriage HAS to be between a man and a woman because “children.”

What Staver and the rest of his ilk never address is that if marriage is about children,  why do they only attack same-sex marriage? They never argue that infertile couples shouldn’t marry. Or that seniors who marry past child-bearing years shouldn’t adopt.

It’s only the gays.

The good news is this: Today was most probably the last Hate March NOM will ever hold as the Supreme Court will most probably rule on the issue of same-sex marriage by the end of June.