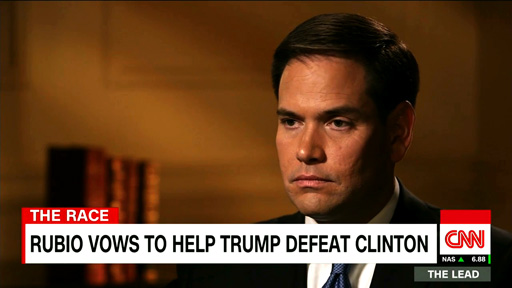 After spending months attacking – sometimes to the point of belittling Donald Trump – Florida Sen. Marco Rubio has finally turned the corner, reworked the thoughts in his head, and is fully behind the Trumpster for president.

Once considered the great, young hope of the GOP, I think he looks a bit defeated still.

In related news, although Rubio has announced he will not seek reelection for his U.S. Senate seat in Florida, folks in the Sunshine State are worried the seat could flip.

And so, Republicans – including one-time foe Donald Trump – are urging Rubio to reconsider.

Poll data shows that @marcorubio does by far the best in holding onto his Senate seat in Florida. Important to keep the MAJORITY. Run Marco!