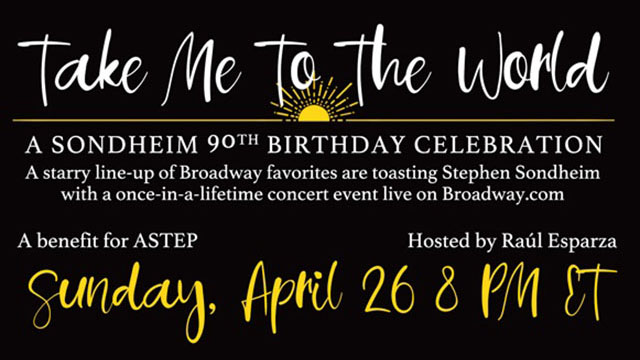 A starry line-up of Broadway favorites are toasting Stephen Sondheim’s 90th birthday with a once-in-a-lifetime concert event live on Broadway.com titled, ‘Take Me To The World: A Sondheim 90th Birthday Celebration.’

As I was planning this post, I realized how much I admired Sondheim’s incredible talent, but how much his work impacted my own career in theater.

Over the next couple of decades, I appeared in productions of Into The Woods (score by Sondheim), more West Side Story (playing about every Jet you can think of), and more.

And the last Broadway production I appeared in was the 2001 revival of his masterpiece Follies starring Blythe Danner, Treat Williams, Judith Ivey and Gregory Harrison – a joyful experience from beginning to end.

Hosted by Raul Esparza the Broadway-palooza will feature musical performances by:

Directed by Paul Wontorek with musical direction by Mary-Mitchell Campbell, the event will benefit Artists Striving to End Poverty (ASTEP).

You can watch the live stream below or at Broadway.com here  beginning at 8PM ET/5PM PT.