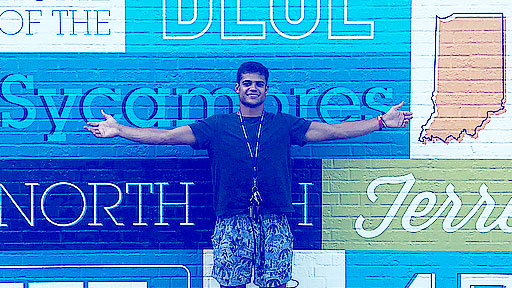 Earlier this year I reported on the huge success and popularity of then-high school senior Jake Bain of St. Louis, who had come out as gay to his high school and found widespread acceptance.

As an out athlete, the talented football player received a scholarship and spot on the Indiana State University football team.

Flash-forward to today, where ISU freshman Jake seems to thriving in his new school and with his new teammates.

Outsports’ Jim Buzinski caught up with the handsome 19-year-old who’s showing the world you can be an out athlete and thrive.

Jake tells Outsports that his life at ISU is pretty much like every other freshman.

Even when he Facetimes with his boyfriend, Hunter Sigmund who’s in his freshman year at the University of North Carolina, Bain says he doesn’t feel the need to hide his relationship.

“There are times when we’ll be in the dorms playing video games and I’ll get a Facetime message from Hunter and I don’t get uncomfortable with that,” Bain shared with Outsports. “I don’t feel a need to go into a different room. Everybody knows. A lot of the freshman I’ve been dorming with have seen Hunter and know who he is.”

In fact, Hunter has already been to visit at ISU. Jake has introduced him to fellow football players and everyone is totally cool.

“Hunter came up to Indiana State and I was walking him around campus and passed some of the football guys and introduced Hunter to them and they all treated him like they would somebody’s girlfriend,” Bain said. “They were really nice.”

It’s easy to imagine that Jake is happy to settle into the role of college freshman after a year that included coming out to the world, attending his senior prom with Hunter, and seeing his entire community support him when the virulently anti-LGBT Westboro Baptist Church attempted to picket Jake at his high school.

Even as he handled all of that with a sense of confidence that would seem way beyond that of a 19-yeear-old, Jake doesn’t seem himself so much as an activist for the LGBT community but as “someone who is willing to be themselves and show everyone it’s ok to be yourself.”

”I try and not put the spotlight on me but instead on the LGBT community as a whole,” he told Outsports. “There’s bunch of people like me, but they’re just not comfortable being out.”

And for anyone who might have worried about Jake fitting in with his new team, he says it’s been exactly the opposite.

“Football is one of those unique sports where there is a true brotherhood that is made, especially when we’re around each other for so much of the day, it gives us a lot of time to really bond with each other.”

“A lot of people assume that because you’re playing a sport like football that there’s assumption that it’s a very masculine sport, and obviously it is, but it doesn’t mean that my teammates won’t be accepting of someone who is gay. It shows how the tide is turning and shows how we have something special here.

”Football gets that hard rep but I think it creates the biggest bond out of any of the sports I have played.”

Jake goes on to share that several players during practice have approached him to let him know they support him and definitely “have his back.”

About the biggest challenge Jake seems to be facing these days is a change of position on the team. As a high school player, Jake was a running back, but his new coaches like his size and speed, so they are training him to transition to defensive back.

Jake had some trepidation about the switch, but it seems to be working for everyone.

In fact, last night Indiana State played its first game of the season against Quincy University and won by a whopping 49-0.

As we head into the weekend, let’s celebrate the Jake’s success as he shows the world that living authentically is definitely a great game plan.

Make sure you head over to Outsports and check out the full profile.