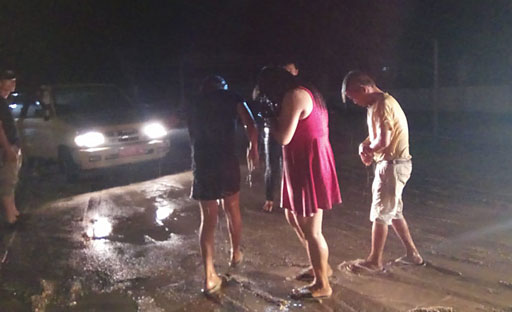 Even though it is not explicitly illegal to be homosexual in Indonesia, police and local vigilantes have recently taken severe actions against LGBTQ people.

Last Friday, police conducted a beach raid in the town of Lampung reports Gay Star News. The raid, conducted in an effort to ‘provide safety and maintain public order,’ resulted in the arrest of three women suspected of being transgender.

In a statement, Indonesian police said, “The growing issue of [LGBT] behavior has troubled the public. Almost every day we get reports from the public regarding this LGBT issue.”

Upon their arrest, the three women were humiliated by being publicly hosed down using a fire truck.

Officials called this a ‘mandatory bath’ or ghusl, which is done to cleanse the body after sex or at the end of a menstrual cycle.

Police officials took photos of the women during the public humiliation and posted them to social media.

In Lampung, Indonesia, three transwomen were arrested and hosed down with fire truck for ‘impurity cleansing’ https://t.co/vLipFi57SK

Amnesty International’s Executive Director, Usman Hamid, issued a statement which read, in part, “The humiliation of these three transgender women is appalling and constitutes cruel, inhuman and degrading treatment which is absolutely prohibited under international law.”

“Raiding people and using a fire truck to hose them down in public are totally unacceptable, as is any other act of violence and discrimination against transgender women or other LGBTI people,” he continued.

According to Gay Star News, authorities began a crackdown on LGBTQ people in 2006 as conservative Islamic groups have gained more and more influence.

In addition to the arrest of the three women, the next day police arrested 10 women suspected of being lesbian due to a photo posted on social media of two women hugging.

On October 19, a gay couple were arrested for launching a gay-themed Facebook page titled, Gay Bandung. The men were charged with “distributing electronic information which contain violation decency.”

And on October 31, two women were arrested for being in a lesbian relationship by police in West Pasaman, West Sumatra.

The same police arrested six people suspected of being transgender earlier that month.

Authorities reportedly said the police actions were, “To ensure that the city is clean from LGBT.”