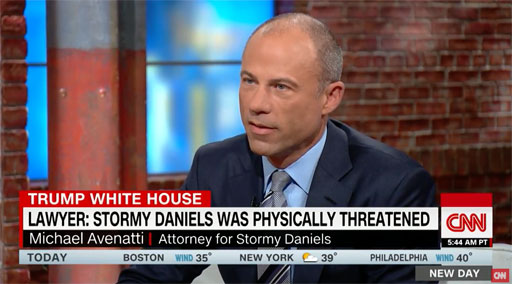 During an interview with CNN’s Chris Cuomo this morning, Stormy Daniels’ lawyer Michael Avenatti shared that his client was physically intimidated to keep quiet about her alleged affair with Donald Trump.

“My client was physically threatened to stay silent about what she knew about Donald Trump,” Michael Avenatti told CNN’s Chris Cuomo on “New Day.” He said more details would be forthcoming in Daniels’ upcoming interview on CBS’s “60 Minutes,” which is scheduled to air later this month.

“She’s going to be able to provide very specific details about what happened here,” Avenatti said.

He would not answer whether or not it was someone close to the President who threatened her, and later told CNN he couldn’t answer a question about whether he or Daniels filed a police report.

Daniels has been in the headlines for weeks now having come forward about an alleged affair she had with Trump in 2006 just months after his son Barron was born. She says she was paid $130,000 in “hush money” just days before the 2016 election.