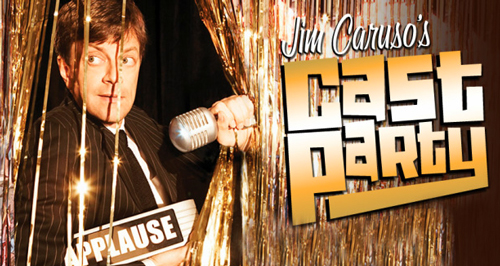 Jim Caruso’s Cast Party is a wildly popular weekly soiree that brings a sprinkling of Broadway glitz and urbane wit to the legendary Birdland in New York City every Monday night.

It’s a cool cabaret night-out enlivened by a hilariously impromptu variety show. Broadway and showbiz superstars often show up and hit the stage unannounced alongside up-and-comers, serving up jaw-dropping music and general razzle-dazzle.

Since opening night in 2003, it’s been the ultimate spot to mix and mingle with Manhattan show folk and their fans. Caruso guides the entire affair like a bubbly cruise director along with musical director Billy Stritch at the ivories,

It’s the party that would happen if somehow David Letterman and Ed Sullivan threw a hip house party around a nine-foot concert grand piano!

Last fall, Caruso and Stritch brought the event to town and folks like Donny Osmond, Frankie Moreno, Clint Holmes, performers from JERSEY BOYS,  PHANTOM, VEGAS THE SHOW all showed up to sing the party on.

Come on down, grab a cocktail and enjoy the show. You NEVER know who’s going to show up!