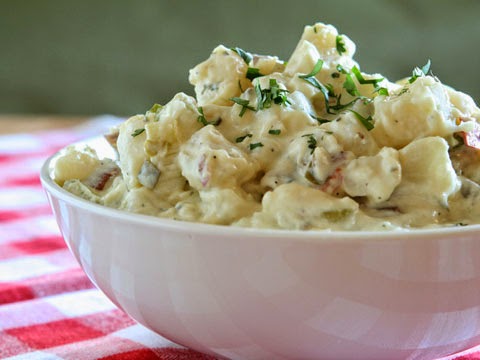 As far as I can tell, this is actually real.

Zack “Danger” Brown of Columbus, Ohio, launched a Kickstarter campaign with the goal of $10 to make potato salad. From the Kickstarter page:

And what does he plan to do with all that money? From his latest update:

We are going to contribute a significant portion of the remaining money to the fund at the Columbus Foundation. This will create a permanent fund to help Central Ohio’s non-profits end hunger and homelessness. These types of funds gain interest every year and grow over time, so, while our little internet joke will one day be forgotten, the impact will be felt forever.

We believe that humor plays a big role in making the world a better place. We plan to use some of the profit from this campaign to start an LLC, pay web hosting and buy / rent production equipment to continue making content. Our LLC will be a for-profit venture and its goal will be to spread humor and joy around the world.

We will update all backers with the exact amount of money that is spent on both the for-profit and non-profit entities. Ultimately, our goal is to be as transparent as possible!

OK, I love you all! Thank you so much for supporting us! I’m so happy we all got to laugh together.

Below was the first “Update” video posted to the campaign; a kind of “behind the scenes” approach to potato salad.