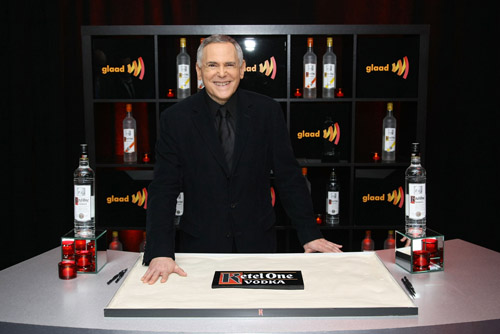 NEW YORK, NY – MARCH 24: Celebrities and supporters stopped by the Ketel One Vodka “Walk of Change” at the GLAAD Media Awards to make their mark – literally.

When leaving his hand print on the Ketel One Walk of Fame, Cheyenne Jackson brought attention to his new wedding ring saying, “Look at my wedding ring!! This is so weird!”

Smash star, Phillip Spaeth, wasn’t shy about getting his hands dirty for a good cause when leaving his handprint on the Ketel One Walk of Change.

Broadway superstar Bernadette Peters flexed her stardom as she playful posed for the camera and even stated, “Am I making a muscle?” as she left her handprint.